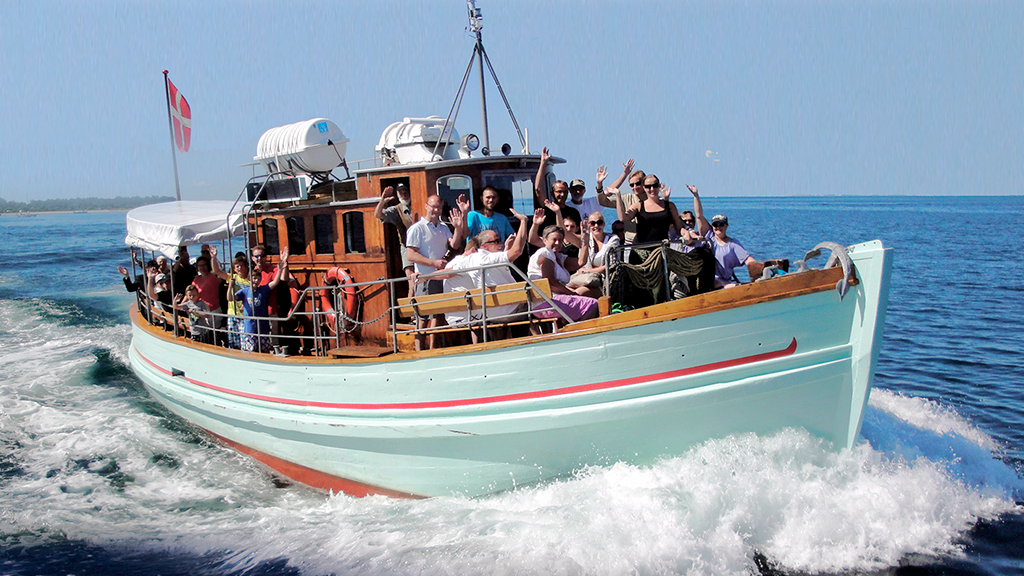 Veteran passenger ship M / S TUNØ sailing Seal safari, trips to Tunø and free charter (ordered tours)
Once, M/S TUNØ was Tunøs residents’ lifeline to the outside world. Today, the ship is a floating piece of cultural history, as a brilliant way to document a long gone era of passenger shipping to the Danish islands. Every year she’s sailing thousands of happy people with ship that down to the small details are preserved, as when it was built.

In 2005, the ship returned to her old waters and is now resident on the Samsø and Tunø. The State Marine Conservation Fund has declared M/S TUNØ for worthy of preservation with the aim of ensuring the ship as a cultural monument. The ship is approved by the Danish Maritime Authority for 38 passengers.

Seal Safari
All Tuesdays and Wednesdays during the season M/S TUNØ is performing three daily tours to the group og islands Bosserne, where hundreds of seals are located. During the trip, the boat is passing the islands Kyholm, Vejrø, Lindholm and Besser Reef.

By Bosserne we stops and passengers can admire the many seals in the reservate. Seals are curious and they can get quite close to the ship, which they know quite well. In the colony are several hundred individuals, adults and cubs of spotted seal, which is the most abundant species in our waters, but in the last three-four years, a gray seal family (a large male with three to six females) had there domicile. The gray seal is not as common in inner Danish waters. It is the largest predator in Denmark. Males can weigh up to 3-400 kg.

By Kyholm, the boat’s skipper will tell us about the island’s fascinating history as a fort, and the quarantine station.

The trip takes about 2½ hours.

Tours to Tunø
Thursdays and Fridays M/S TUNØ is performing tours to and from the neighboring island Tunø – the ship’s former home port.
Tunø is a car-free island with 120 inhabitants and a popular destination for boaters. On the island there are shops, taverns, restaurants, miniature golf, tennis, bike rentals and summer shops. Tunø has a lovely varied countryside, and to the three-hour walk all around the island along the coast.

In connection with the Thursday tours there can be arranged guided tour on the island.