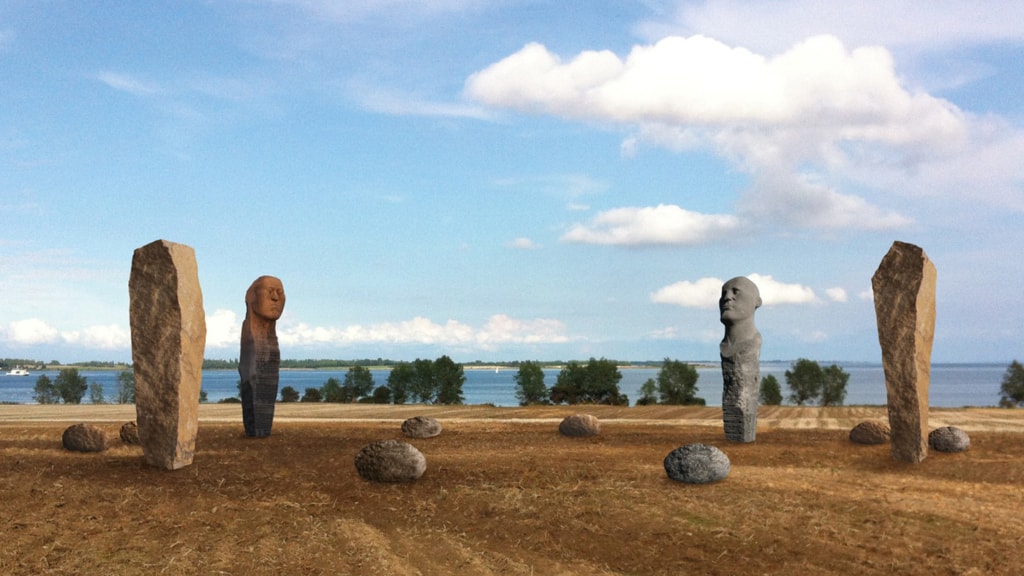 Did you know, that you can see this route and many other nature experiences in the app “Naturlandet”. The app can be downloaded in App Store or Google Play. All information is accessible in English, Danish and German – the app is FOR FREE.

There are no specific facilities for kayaks; therefore one should usethe beaches to go on and off shore. The beaches are mostly rocky, soplastic kayaks are fine for this area. There are mostly shallow waters,and in many places there are large stones often just below the surface- even very far from land. So you have to be alert when rowing.A trip to Vejrø is for more experienced rowers and one should never goalone. Make sure the weather stays decent. From the bottom of KagevigBay, near Fejø, there is approx. 9 km. If you start rowing to the tip of Skalø,then the trip in open water is reduced to approx. 6 km.If you use a nautical chart and plan the trip, most of the route can actuallybe done at water depths where you can reach the bottom, but currents andwind can make it a challenging trip.Femø Sund has a water depth of 8 m. From Fejø to Ståldybet the water depth exceeds 10 m.

Femø: Nature campsite on the north eastern part of the island.

The majority of the Smålandsfarvandet are an EU Bird Protection Area and access is prohibited on the islands of: Rågø, Rågø Kalv and Rågø Sande between 1 March and 15 July. Vejrø is privately owned; remember that you are not allowed to be closer than 50 meters from the houses when on the beach, use the Marina.

Fejø is known for its apple plantations and several farmers’ shops where the well-known Fejø Fruit is grown and sold. You can go ashore at Vesterby on the pebbled beach. A trip around Fejø is of 26-27 km and if the weather is good, it can easily be done in a day. On the way around you pass by Skalø which has a varied coastline. You will pass the shallow Kagevig Bay, which often has good wind conditions to practice. Continue around ”Skovnakke”, where there are many stones just above the water surface. Next stop is Sletteren Beach - the total trip is approx. 9 km. By Dybvig Harbour on Fejø the old slipways can be used for landing. From here it would make sense to take a trip to Lilleø - a trip of some 4 km. From Sletteren Beach there is approx. 3 km to Femø across the Femø Sund with water depths of approx. 8 m.

From Dybvig harbour on Fejø the trip to Femø is approx. 6 km. Femø is a charming hilly island with several interesting places to visit or pop in. The trip is approx. 17 km. Every year a woman’s camp and Femø Jazz Festival are held here. The southern tip of Femø is called ”Cape of Good Hope” - with fresh wind and waves from the south, it is exciting to surf the waves in the kayak. Askø with the causeway to Lilleø is a tour of some 14 km from Kragenæs. Here is also cultivated fruit as on Fejø. Claus Meyer, a well known gastronome, owns the plantation on Lilleø next to Askø. Along the coast there is a rich flora and fauna. Departing from Kragenæs you reach Rågø after 6 km - or some 2 km from Skalø (in the northwestern part of Fejø), but here you have to cross Ståldybet with water depths of more than 10 m - in this area seals are often seen. Rågø is an exciting small uninhabited island; with the last occupant having left in 1964. Here are several deer on the island. The water around Rågø, especially between Rågø Kalv/ Sandene and Rågø itself is very shallow, and it is often easier to use your hands to push off against the seabed, rather than using the paddle. Vejrø is located about 8 - 10 km north of Fejø and a trip to Vejrø is recommended for more experienced rowers. It is advised to be several people on the trip and you need to be certain of good weather. The island is privately owned, there is a gourmet restaurant, farm shop with organic products from their own farm, wine cellar, lounge, greenhouse with orangery and a new hotel. Use the marina for getting ashore on Vejrø.